“As my painting styles from my various genres gradually merge over time into what has been described as “Scottish Impressionism” it would be remiss of me not to ascribe the huge influence of Monet in my work. Most recently I have attempted a series of waterlily paintings certainly inspired by Monet but also to try and understand with some depth his fascination for the subject. I am fortunate to live close to the lilypond in St Andrews botanic gardens and so able to visit often taking in the effects of changing light and the changing subject as the pads emerge with an early iridescence, massing green and flowering later in the year. My own fascination with reflections and light and shade make this an irresistible subject marking the time of day and time of year with canvases large and small.”

Born Edinburgh 1953 he studied at Duncan of Jordanstone College of Art, Dundee 1970-1974. During the summer of 1973, Jack was selected to study at Hospitalfield House, Arbroath under the tutelage of Peter Blake.   On graduation he achieved a highly commended post diploma, the highest award possible at that time, he was also awarded the Farquhar Reid Travelling Scholarship 1975.   The scholarship enabled his to leave Scotland and he headed for Paris and Florence to study and he began a European love affair.  On his return to Scotland Jack set up a design studio which he successfully ran for 20 years.   During this time he continued to make time to paint and exhibit. In 1997 he decided to become a full time painter and now works from his studios at home in Fife, Scotland and on the Cote d’Azur in the south of France.  Jack chooses to paint several distinct types of work. He says “I get bored easily, so the idea of painting only one type of subject, in one particular style, doesn’t keep me interested creatively.

I read somewhere that when the English painter Ken Howard hears himself described as “old-fashioned” he takes it as a compliment. I would probably do the same. Not because I think that I am old-fashioned but I certainly hold to the values that seem now to have passed to an older generation. I have never been involved in the mad dash toward novelty in the mistaken belief that there, and there only, lies originality.  But it has been slow to dawn on me that originality can lie within one’s self, one’s individuality and an individual approach to one’s art.

Perhaps for that reason I have settled into a range of styles and subjects that are in no way new but lend themselves to the expression of an individual vision, an opportunity to portray the timeless qualities of the world around me that the viewer will hopefully find accessible and uplifting.

It is no accident then that I find inspiration where generations of artists have found inspiration before me; in still life, in landscape and in figure painting. But in all of these I feel no compulsion to find a  “new angle”, just an opportunity to express an individual point of view and share it.

So it is that I have found myself on the well worn artistic path between Scotland and the south of France and Venice, immediately attracted to the timeless vistas almost unchanged by the relentless march of the modern world. Venice in particular with its absence of cars and vans - even its vaporetti date back over 100 years - makes an irresistible subject. In France I find myself editing out the modern intrusions to arrive at a more serene balance of the built environment and landscape, a calmness but hopefully without cliché. I always prefer the harbour scene without the white plastic boats, which I noticed after painting it is almost the only change to Cassis harbour since Cadell painted it over a century ago.

In the studio I am attracted by the same challenges of portraying light and shade, texture and colour to create a balance in which I hope to attract and captivate the viewer both in still life and figure work. The flower petal, the silver, the glass all represent an opportunity for an economy of brushwork to create an illusion of presence. The pose and the elegance of form are the essential qualities that help make the composition connect with the viewer in figure work. 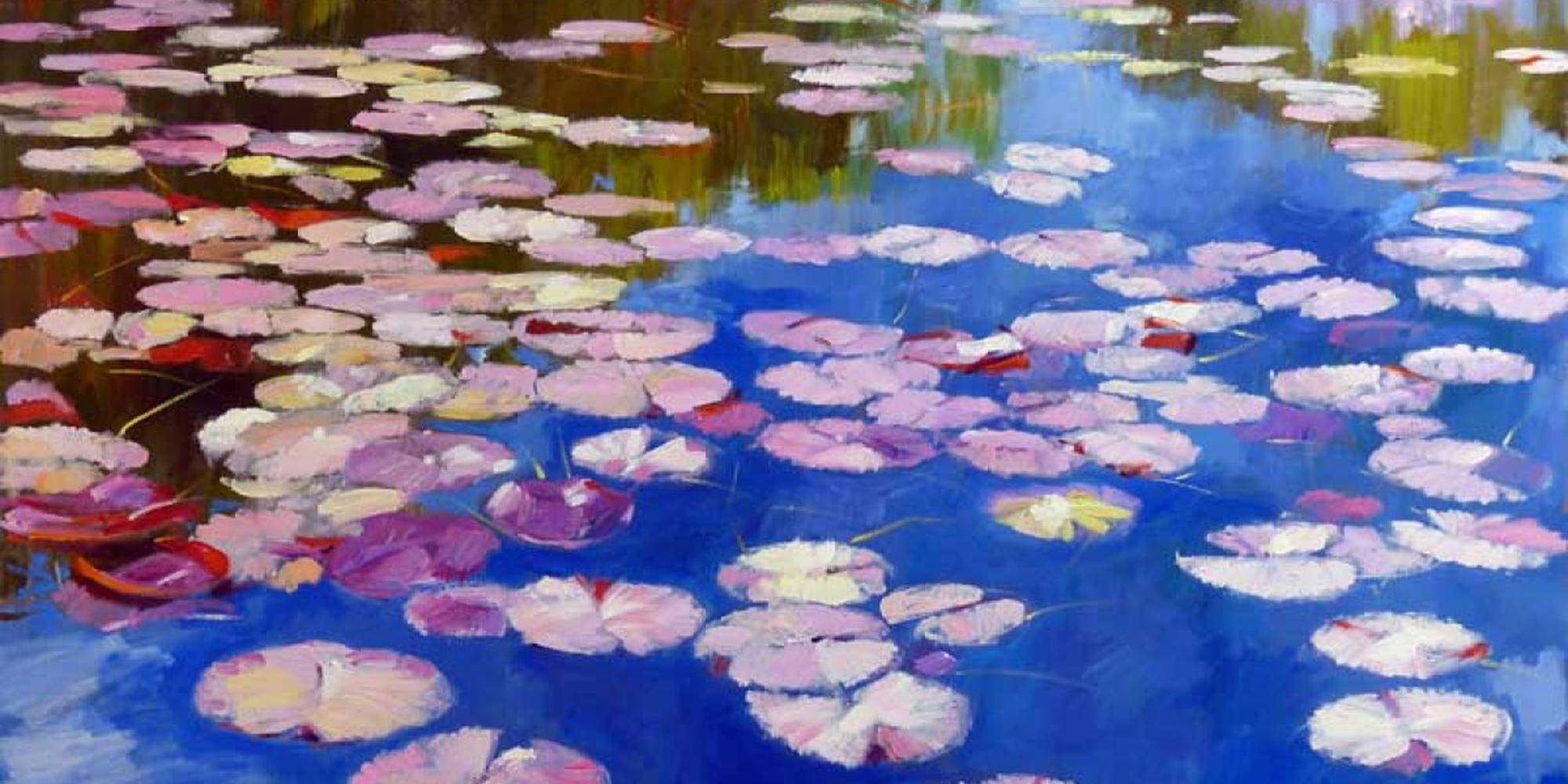 Reflections in a Lilypond